Feeling a little behind on getting these posts out, but doing what I can! :) For May I made an attempt at lifting the design of some of the Becky Higgins core kits' 3x4 filler cards, but using Bible verses. I've made two of these cards so far, one of which I've put in May's spread, and the other I haven't used yet.

I picked my Bible verses, copied and pasted them into a paragraph in Photoshop Elements, then played around with the colours, font (Bebas Neue) and direction. I really like the result and think I'll do this again in the future. 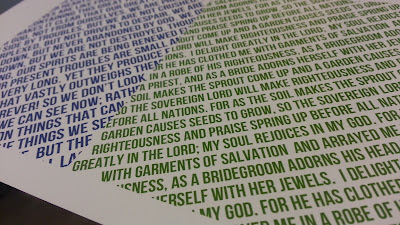 The verses in blue are from 2 Corinthians 4, and the verses in green are from Isaiah 61. They are two passages which have been a great encouragement lately.

For June, I have a photo and a story to share (as-yet unwritten for PL, but below is the content of what I'll share). Here is the photo: 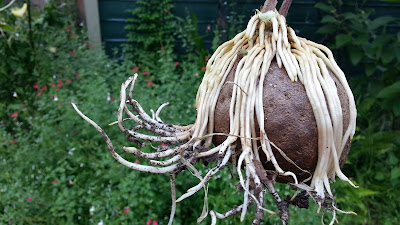 This is a picture of the roots of one of the (many, many, MANY!) "potato vines" that we have growing in our  back garden. The leaves of these vines are what looks like a pleasant heart shape. Unfortunately, in the time it takes to blink and realize that there's a vine growing, it's just about taken over the whole back garden. Pulling on the vines is quite satisfying, but the only way to stop them from returning is to dig out these roots, and they're often not easy to locate. They really do look like potatoes, hence the name of the vine (I'm assuming, anyway). In recent weeks I've found myself spending every weekend, and several weeknights, going outside to pull a few more of these things out of the ground. And every time I'm outside doing this, I find the Lord is speaking to me. In this case, it was about the seriousness of sin, and how if you let it get out of hand, it gets much worse than if you deal with it properly in the first place. Going for the root really is the only way to deal with the issue, and yanking on a couple of leaves won't address the problem and could even make it worse. Even though it's a bit of a pain to have to put forth the effort in pulling all these vines up, I appreciate the life lesson that the Lord whispered to me, as it felt like my chore had not been in vain!

As far as sharing this photo and story in PL, I'm intending to display the photo and have the journaling on a card behind it, with a tab to pull it out to read. This is another technique I haven't used, but I think it may be one that I repeat at some point.